Day 22 of Big Brother Naija is no doubt one of the most fun-filled day for the both the housemates and viewers. Dont Worry if you missed #BBNaija Day22, we got you covered.

Laughing and connecting with Falz The Bahd Guy!

This week Biggie reminded the Housemates that they had a voting gathering of people that they needed to keep engaged to win and furthermore that they ought to prepare themselves for an extraordinary visitor. After hearing the news the suspicion was at that point tangible. 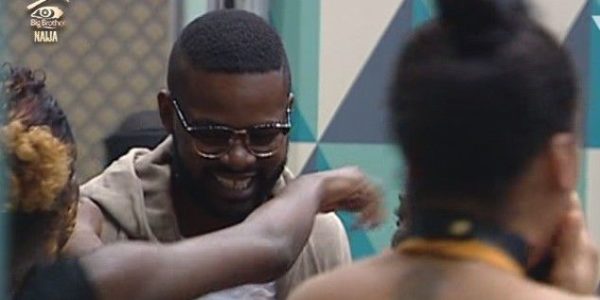 Biggie’s extraordinary visitor ended up being none other than Falz The Bahd Guy! The Housemates went ballistic and swarmed him shouting after he strolled in. After all the disarray had died down he told the Housemates he was a tremendous enthusiast of the show before making a gesture of blowing TBoss a kiss as she become flushed. He then constrained the Housemates to admit their pounds. New Housemate Jon admitted that he had affections for TBoss affirming Bisola’s allegation that they were getting very comfortable and Miyonse is a relic of days gone by!

He then sat back as they danced for him and was so overcome with gratitude he started fake crying. No doubt he was throwing shade at some of our more emotional Housemates and everyone had a good laugh about it.

Gifty was also smitten with Falz. She interrupted him to let him know she thought he was cute and she’s been watching his lips since he walked into the House. 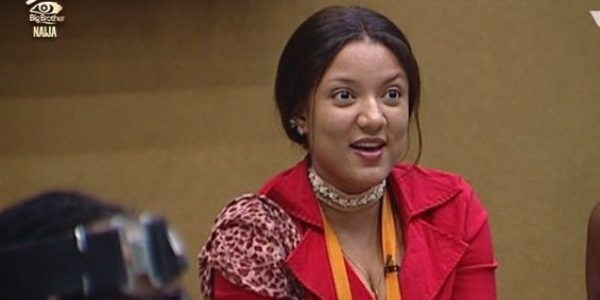 TBoss was feeling the heat too and literally begged him to sniff him. Being a great sport, Falz complied with her request and boy was she pleased. 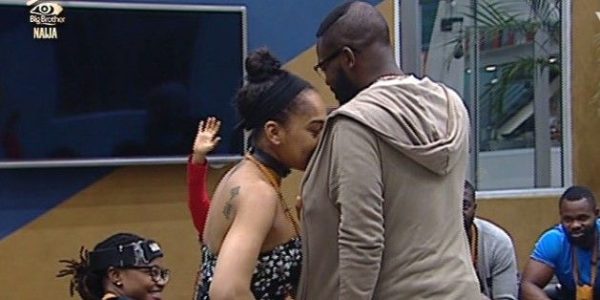 Then things got serious as ThinTallTony asked him how he got where he is as he had admired him for years. Falz opened up about struggling with being unique but learning to compromise without losing himself. He then spoke to all the Housemates about their passions and told them to come out of their shells and be true to themselves in order to make it far in this game (particularly Gifty and Debie-Rise).

It wasn’t long before the buzzer sounded and it was time for Falz to go but not before taking an epic selfie with our Housemates and telling them how much he admired them. “Everybody here has already blown up!” TBoss still swooning asked for his jacket before he walked out the doors. 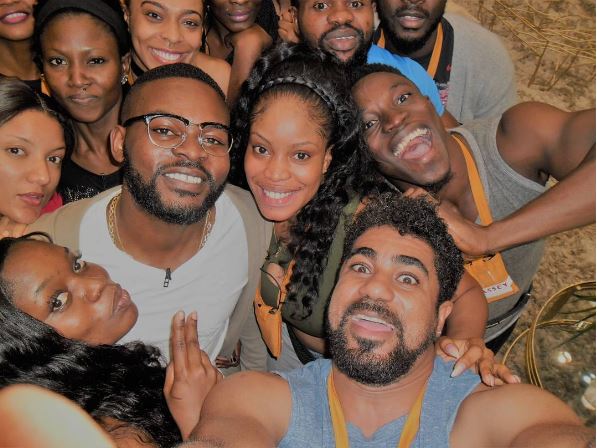 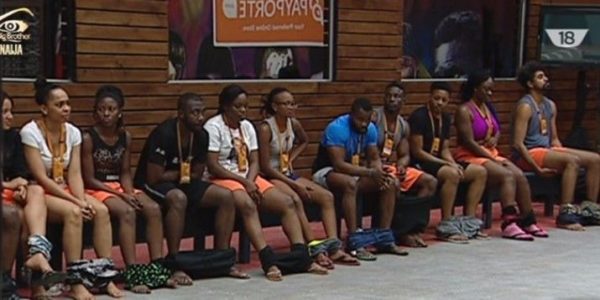 For this week’s Head of House task, the Housemates had to use only their right hand to unfurl a large roll of tissue paper. The goal? To find the hidden roll of blue tissue paper hidden underneath. The Housemates had to work quickly but there was not guarantee that the roll they got started on had the hidden blue roll underneath making it anyone’s game 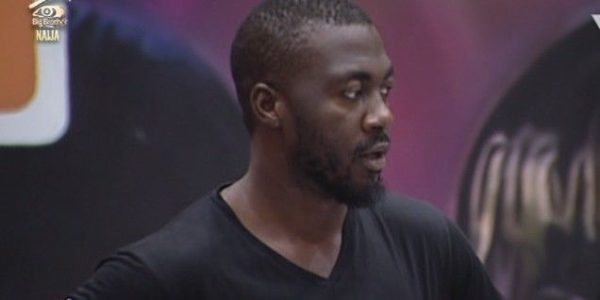 Right off the bat, Bally got knocked out of the running. It would seem he didn’t pay close attention to the rules and used two hands to unroll the tissue paper. Biggie’s voice boomed through the speakers telling him to step away as he’d been disqualified. Looking sullen and dissapointed in himself, all Bally could do was watch on as the rest of the Housemates tugged at the tissue rolls frantically. 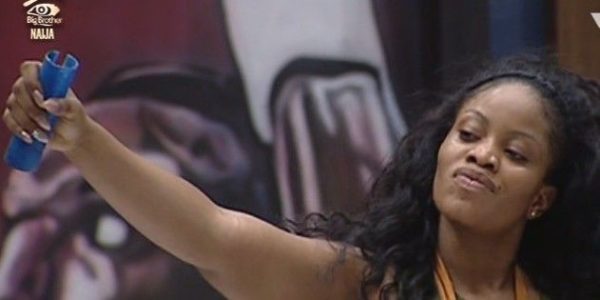 The task proved to be a really hectic arm workout and the Housemates were sweating by the end! ThinTallTony finished first but found no blue roll. Instead, it was Ese who came out victorious. She collected her crown and scepter as Biggie congratulated her and told her to rule with pride!

Making something out of nothing

Biggie is forever coming up with original twists for our Housemates.He asked them to band into three groups before tasking them with creating musical instruments out of homemade, makeshift instruments.

ThinTallTony immediately came up with a brilliant idea have all the musicians in the House lead the different groups to make sure they nailed the task.

With guys disguised as girls and girls as guys, it was one curious scene taking place in the lounge as the Housemates sorted through the containers, bins, and pins to meet their goals.

Biggie had warned them against a possible punishment should they fail the task.

And thus Housemates fully immersed into the feat of making something out of nothing! 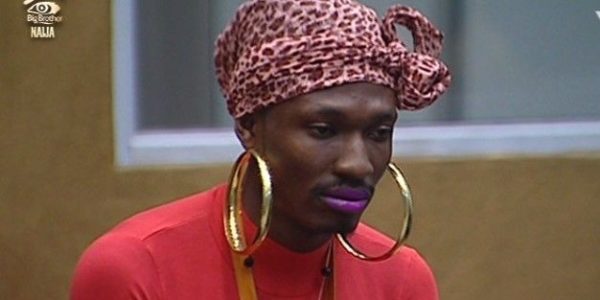 Following Debie-Rise’s suggestion that they need to make afternoons more interesting instead of sleeping the Housemates decided to dress up as each other with truly hysterical results. First to get dressed was Kemen who strutted around the room checking his butt out in the mirror and looking stunned by how good he looked in a dress. “I dey hips!” he exclaimed laughing. 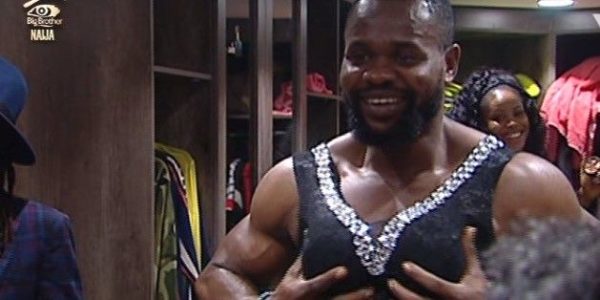 Bassey slipped into his ensemble and put on a wig before showing off his new look. TBoss immediately joked that he looked “so ugly!” while everyone laughed hysterically. Enter Uriel to the rescue. She stepped in and worked her countouring magic to make Bassey as pretty as can be.

Head of House Ese went all in and even used fake lashes to make sure his make up was flawless the finished of the look with a black gown and a flower crown. Even fake Housemate Jon got in on the fun and people on social seems to think he made the prettiest girl. 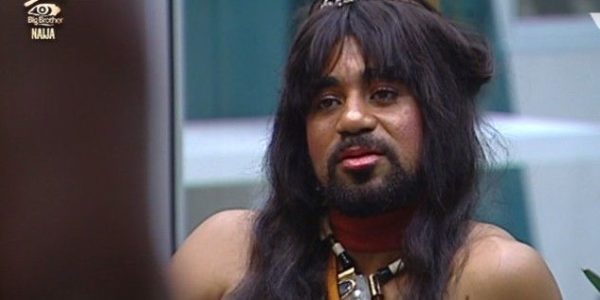 ThinTallTony and Efe got into character with the former playing a sex worker and the latter a market lady. TTT absolutely demanded that people refer to him as a LADY too.Then the Housemates started making fun of Efe who immediately shut them down yelling “I don’t care what you say! My market dey sell!” Even peeps on twitter were in stitches. 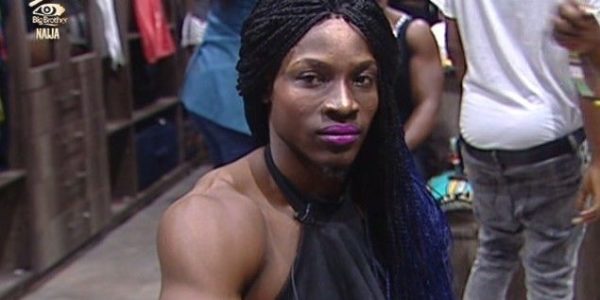 It wasn’t all about the boys, though. The girls got in on the action, dressing up in bow ties and waistcoats and looking like distinguished gentlemen. They then finished off their look by using tons of polish to mimic a full beard. 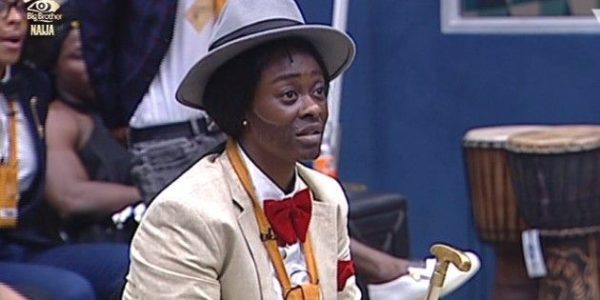 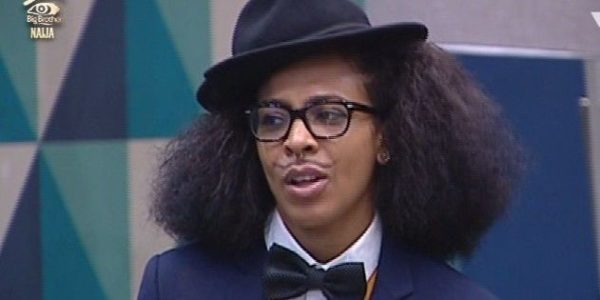 As Big Brother called the Housemates into the Diary Room one by one, they made their Nomination decision known to him and then proceeded to sit in the lounge in silence.

This is how the Nominations went down:

The housemates up for eviction were Gifty, Tboss and ThinTallTony. The HoH ESe, saved Tboss and replaced her with Marvis.

What are your predictions for Sunday’s eviction? Who do you think is going home?

Missed any of the cross dressing drama from earlier today?

Do you agree with Bisola that TBoss is all hot and bothered about Jon and has forgotten all about Miyonse?

Here Comes the Making of the Crossdressers