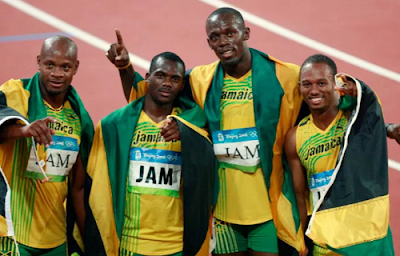 The list of the fastest men in the world to fail drugs tests grew bigger on Wednesday when Usain Bolt lost his claim to the title of ‘triple-triple’ Olympic champion after a Jamaican 4x100m team-mate retrospectively tested positive for a banned substance and caused the 2008 Beijing gold medal winners to be stripped of their title.

Bolt, the world’s greatest track-and-field star, is now the only one of six sub-9.79sec 100m runners not to have committed a doping violation, with double Olympic champion Nesta Carter caught out in the reanalysis of urine and blood samples from the Beijing Games. But because his team mate tested positive for a banned substance, he has now been stripped of his 2008 Beijing gold medal title.

Footballer Taye Taiwo celebrates his wife on her birthday

Ahmed Musa remembers his mum on the one year anniversary of...